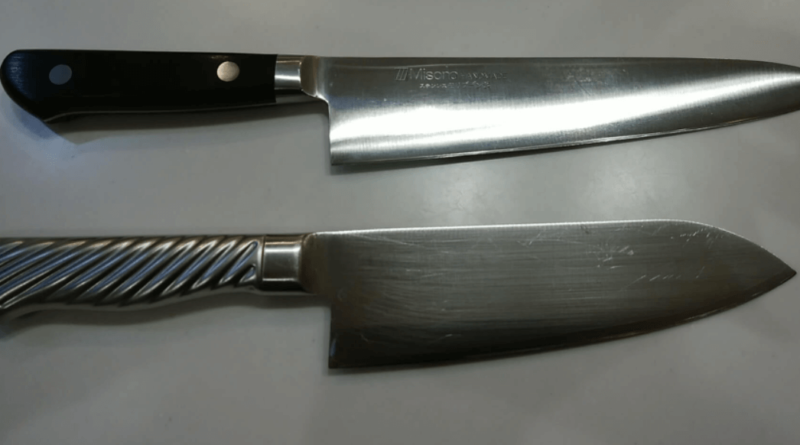 The most common all-purpose kitchen knives are either Santoku knives or Chef’s Knives (or Gyuto “牛刀” in Japanese). In Japanese households, it seems that many people use santoku knives.

Which type of knife is superior?

In conclusion, it is a matter of preference. However, each has its own characteristics.

What is a chef’s knife?

Chef’s knife is a western style knife used worldwide. It is suitable for cutting chunks of meat, but can also be used to cut vegetables.

What is a Santoku knife?

Santoku (三徳) means “three uses,” indicating that it can be used for a wide range of foods, including meat, fish, and vegetables.

As noted in the article on vegetarian knives, the santoku knife is a combination of the Japanese nakiri knife and the Western chef’s knife, and was created as a blade that has the characteristics of both.

The general length is about 17cm (6.6in), shorter than a typical chef’s knife.

Santoku knives are suitable for cutting vegetables because of their vegetable cutting knife properties.

By cutting as if knocking on the cutting board, you can easily make julienne cuts and the pieces of food you cut are less likely to remain connected.

Santoku knives can also cut large vegetables without much effort.

The blade is short, so it is easy to place even when kitchen space is small.

Disadvantages of the Santoku knife

Because the blade of the santoku knife is rather thin, cutting hard, large squash and other foods is somewhat difficult.

Both types of knives can be used as all-purpose knives, but the overall trend is for santoku knives to be suitable for novice cooks, households with small kitchens, and households that use mainly vegetables.

Chef’s knives, on the other hand, are suited to high-level cooks, large kitchens, and households with a large meat or fish ratio.

Incidentally, I mainly use santoku knives because I mainly cut vegetables, and as a secondary means, I use chef’s knives when cutting meat and fish.

Recommended chef’s knives and santoku knives made in Japan are introduced on the following page: 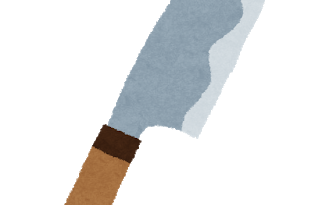 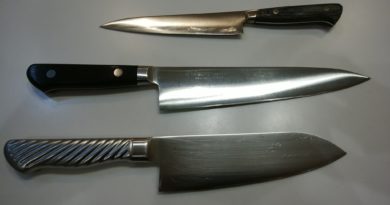 Where to Buy What Type of Kitchen Knife in Japan